This guide walks you through how to migrate a Qlik Sense visualization extension from the AngularJs-based extension API to nebula.js, the framework-agnostic visualization SDK. Through this tutorial, you are going to learn about the benefits nebula.js brings to bear working with modern front-end frameworks.

To understand the overall migration process, you need to take an existing visualization extension that has already been developed using the Extension API like the one below. The extension is a Scatter-Pie plot that allows to visualize each scatter plot’s bubble as a pie-chart to understand the Sales-Profit correlation for the three categories state-wise as shown below:

The motivation is to recreate the exact same visualization by leveraging the novel nebula.js framework.

Traditional Extension API-based visualizations need JavaScript code(.js), a metadata file (.qext) and stylesheets (.css). The logic of the extension is controlled using the code in the JavaScript file and so that is the entry point for your development activity. In the nebula.js approach, the various modules of the code are segregated to align it to a modular architecture, thus providing greater flexibility to the developers. Let’s deep dive into the steps required to migrate the current extension.

The first step is to get all the files required as part of developing the extension. You need to use the nebula.js CLI like below and structure the project.

The --picasso none option tells the command to not create a picasso visualization template, other options are minimal and barchart.

One of the advantages of using the nebula.js framework is that it comes with a local development server that allows developers to see their output as they code. To start the server, execute the following command.

Now, you need to connect to Qlik’s Analytics Engine using the WebSocket protocol. Once the connection is established, a list of apps is presented to test the visualization in the Developer UI.

The next step is to configure the data structure and define the hypercube as shown in the below code snippet below. This is precisely similar to what is present in the current extension(Extension API). However, all this information is saved under one single JavaScript file in the older approach.

The only thing that is done differently here in Nebula framework is to add the /qHyperCubeDef as a data target in data.js like this:

nebula.js is built on the concept of custom hooks. If you do not know what hooks are, this tutorial can give you a high-level idea of how to leverage them in terms of Nebula. As per the get started with Nebula extension tutorial, two essential packages are required to be imported to access the Qlik Sense object’s layout and render the data. They are useLayout and useEffect. Also, since the current visualization extension is built using D3.js, D3 needs to be installed in the NodeJS environment and the package imported. To do that, use the below commands.

Now, to understand what was done differently here in the nebula.js framework as compared to the Extension API, see below.

As seen from the comparative analysis, the primary difference is that the Extension API uses RequireJS to load resources asynchronously and has a jQuery wrapper around the HTML element. In the nebula.js framework, these dependencies are eliminated, thereby making it framework agnostic and faster.

The important goal here is to develop the main capability of the extension. Again, the whole idea here is to replicate the exact visualization developed using Extension API without investing additional time in rewriting the source code. The entry point for the extension’s code is the index.js file, and currently, it looks like below with all the necessary packages. 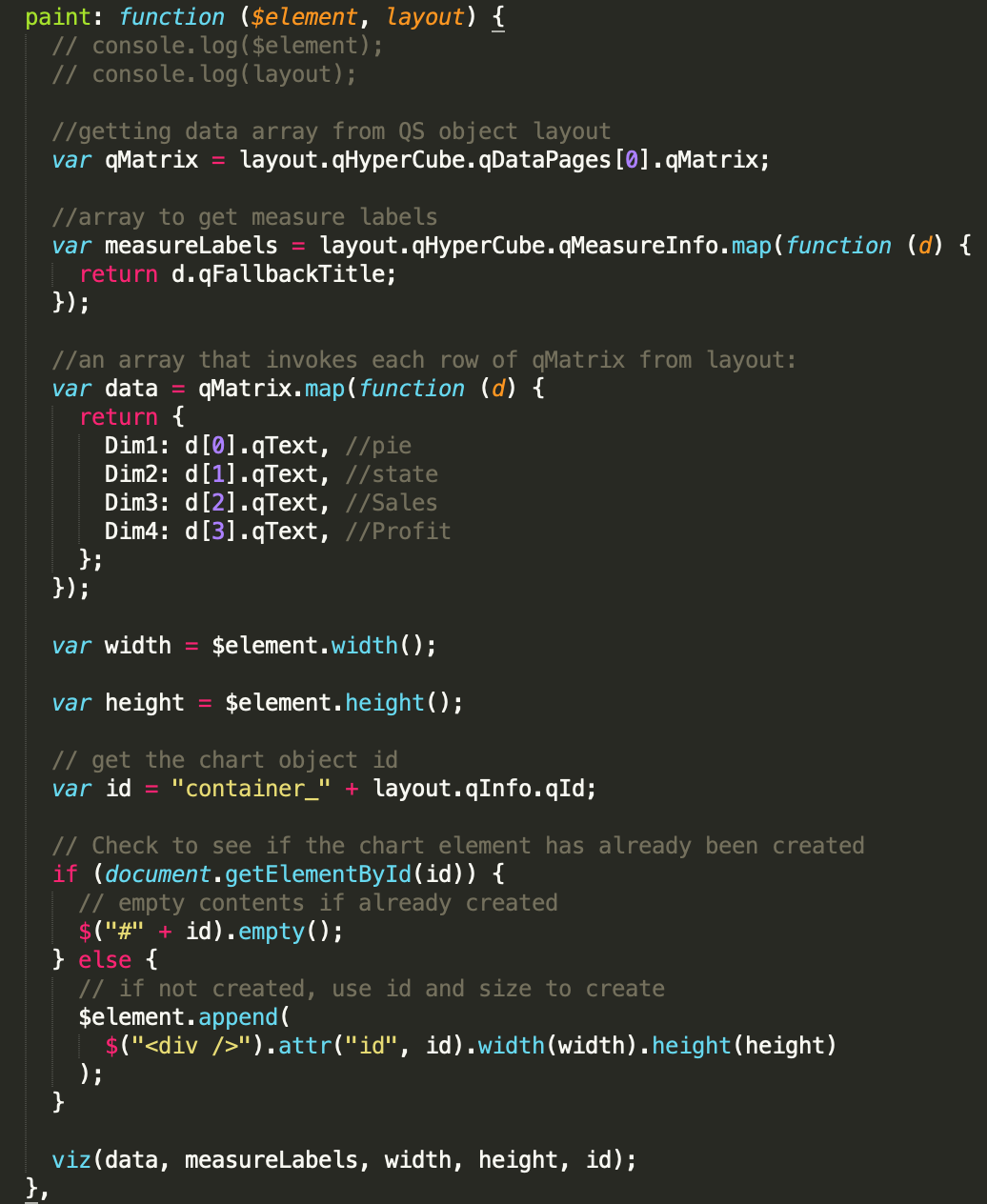 Take a look at the index.js file. Here, the function supernova() consists of the component() method, which is where all the rendering takes place. To render something, the DOM element to which the visualization is assigned needs to be accessed, and to do so, the useElement method is used. Also, as mentioned in Step 4, to access the QS object’s layout and bind the data, the useLayout and useEffect methods needs to be leveraged. These three methods is all that is needed to migrate the current code to the newer framework successfully.

After copying the current code and aligning it to Nebula’s programming standard , the code looks like this.

As seen, most of the code lines are similar to what was present in the Extension API. The only difference lies in the way the interaction happens with the three methods here in nebula.js. In the end, the viz() method is called within the component() function, and that is where the D3.js code for the visualization is. Again, this is similar to what was done in the Extension API.

The good old extensions developed using Extension API had to be bundled (zipped) together with a .qext file, a JavaScript file, and any other dependency files. nebula.js presents a modern way of building and preparing the extension to be deployed to the Qlik Sense environment. Firstly, since Nebula runs in a NodeJS environment, it is easy to bundle everything and distribute the visualization as a Node Package using -

Secondly, to deploy the extension to a QS environment, the below command is used, which generates all files into the folder /hello-ext, that you can then use as an extension in QS.

Now that the resources required to migrate existing extensions to the nebula.js framework is clear, let’s recap the potential benefits of the new SDK.

For folks who want to get started with Nebula or build advanced visual representations using the SDK, here is a list of accumulated resources-

This brings an end to the tutorial, and hopefully, this can serve as an initial guide for developers and organizations planning to migrate their existing visualizations to Nebula.