The dock layout is the engine that controls how different components are positioned and whether a component is rendered or not, depending on available space, that is, the responsiveness.

There are 5 different layout areas, with the center area being the primary one. It is typically where the visual components are positioned. On each side of the center area, there is another area on which a component can be positioned (docked). They are referred to as top, bottom, left and right.

Most components should handle any of the 5 different areas, but it may make more sense for certain components to be primarily either in the center or at the sides.

The default physical size is equal to that of the container (element) for the chart.

By explicitly setting a size, it is possible to override both width and height of the container. Either width or height, or both can be specified.

The input value is specified as a number and represents the size in pixels.

The default logical size is equal to the physical size.

The input value is specified as a number and represents the size in pixels.

Each component can tell the layout engine that they require a certain amount of space, where the direction of the space required is the perpendicular axis of the dock area, given that left/ right area has a main axis of Y and top/bottom main axis is X.

The arrow demonstrates the direction in which a component requests space for each dock area. Note that components docked in the center area have no impact on the space available, which is instead determined by the amount of space occupied by components docked at the sides.

The responsive engine has two ways to determine if a component should be rendered or not. The first way is to compare the space required by a component to the logical space available. If not enough space is available, the component is discarded and the engine moves on to process the next component. The second way is to define a minimum layout mode, this is currently the only way to discard a component docked in the center area.

Each of the side areas can take a certain amount of space from the center area. If there is not enough space available for the center area, either in vertical or horizontal direction, the layout engine must remove one or more of the components docked at the side.

The minimum layout mode is a way to tell the layout engine that a component should be discarded if the logical size is below a certain threshold in width or height.

The following dock properties are available in the component definition:

In the example below, all docking areas have two components with a displayOrder of 0 and 1. Notice how the center area only displays the component with displayOrder 1, which is the z-index in action. 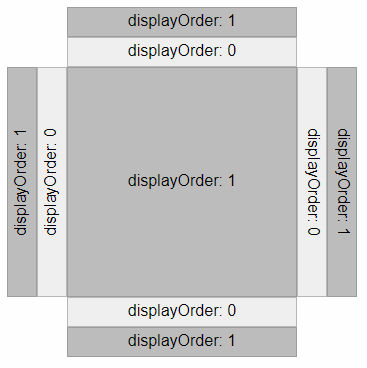 The following diagram shows the order in which components flow through the layout engine.